During his time spent in the service, he has gained extensive knowledge and experience in small boat operations. Bob has served as an instructor for the Coast Guard’s Small Boat School and authored the Boat Crew Pocket Guide.

After retirement, he started a company that manufactures high quality water and ice rescue equipment. As an inventor, he has developed numerous water and ice rescue devices that are now widely used throughout the world. In fact, the United States Coast Guard is one of MARSARS more notable customers. They have recently modernized and equipped all Northern Stations with the MARSARS Ice Rescue Safety Shuttle Kit.

In this high-risk low incident environment, the MARSARS® Ice Rescue Sled (IRSS Sled) is the first ice rescue device designed to gently extract the victim from a safer distance.

As first responders, we must be mindful of the rescue dictum: Self-Rescue, Reach, Throw, Row, Go. The self-rescue, reaching phase of this principal has been incorporated into the design of this unique mitigating device for high-risk situations. 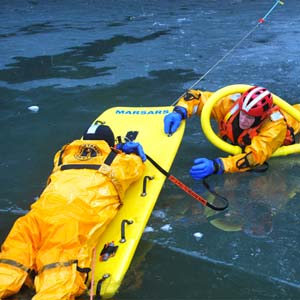